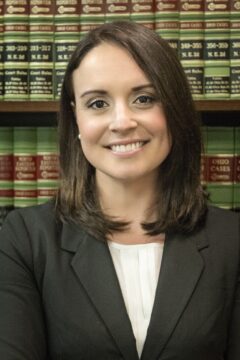 In March of 2019, Amber Zibritosky was appointed Clerk of the Stow Municipal Court upon the resignation of her predecessor Diana Colavecchio.  As the Stow Clerk of Courts, Amber serves as the keeper of all official records for the 20,000+ cases filed with the Court annually.  Amber is also responsible for the receipt and proper disbursement of the Court’s 7 million annual revenue as well as managing a staff of 20 deputy clerks and an annual budget of 1.2 million.  Amber is a current member of the Ohio Association of Municipal / County Court Clerks, the Akron Bar Association, the Ohio State Bar Association, and the Ohio Municipal Attorneys Association.  Prior to her appointment as Clerk, Amber also served on the Summit County Criminal Justice Advisory Board.

Amber is a lifelong Ohio resident and 2003 graduate of Hudson High School.  Amber attended Miami University in Oxford, Ohio where she obtained a Bachelor’s Degree in Political Science and graduated Magna Cum Laude in 2007. While at Miami, Amber was published for the first time in the University’s nationally circulated journal, “College Composition at Miami” and also competed as a varsity member and senior co-captain of the Division I Redhawk’s swim team.  Amber then went on to attend Ohio’s only first tier ranked law school, the Ohio State University Moritz College of Law, with a three-year scholarship. At OSU, Amber served as a senior editor of the I/S Journal of Law and Policy and was elected by her peers as Vice President of the Student Bar Association. Upon her graduation in 2010, Amber returned home to Summit County where she studied for and passed the Ohio Bar Exam and began her legal career in the Juvenile Division of the Summit County Prosecutor’s Office.

In 2011, Amber accepted the position of Assistant Law Director for the City of Stow.  Within less than a year, she was promoted to Deputy Law Director.  In 2014, Mayor Sara Drew appointed Amber to the position of Law Director and City Council unanimously confirmed her.  In 2015, Amber ran for and was elected to a four year term as Stow’s Law Director with nearly 60% of the vote.  At the age of 30, Amber became the youngest elected Law Director and the first woman to be elected Law Director in the City’s history.  During her tenure as Law Director, Amber served as the Chief Legal Counsel for the City and all of Stow’s elected officials including the Clerk of Courts, Judge Hoover and Judge Coates.  Amber represented the City and the Court in all official actions including dozens of appearances before the Ninth District Court of Appeals, several appearances before the U.S. District Court of Northern Ohio, and an appearance before the Ohio Supreme Court in 2016. Amber also served as the Chief Prosecutor for the City of Stow, Boston Township, Northfield Center Township, Sagamore Hills Township, and Twinsburg Township.  As the Chief Prosecutor for 5 of the 16 jurisdictions that comprise the Stow Municipal Court district, Amber and her team of assistant prosecutors were responsible for thousands of cases per year and managed the largest caseload before the Court.  In 2018, Amber was recognized by her peers for her work in the field of municipal law when she was unanimously elected to serve as the President of the Northeast Ohio Law Director’s Association.

Amber is a proud homeowner and resident of the Call’s Farm neighborhood in Stow where she resides with her husband Jerad, an Assistant Law Director for Cuyahoga County, and her two children, Grayson (5) and Sienna (2).  Amber is also a Rotarian and serves as on the board of the Stow School’s Foundation.  In her spare time, Amber enjoys running half marathons and competing in triathlons.