Nearly 40 people headed for the entrance, nobody wanting to be late. A 6:01 p.m. arrival means a locked door and a required visit to the judge the next day.

Promptness is just one tiny lesson Judge Kim Hoover has wrapped into a special after-hours program that attempts to rehabilitate thieves, substance abusers and other misdemeanor offenders using motivational speakers and inspirational videos.

Hoover said there was no template for this particular idea when it came to him three years ago.

“It’s my thing right now,” just one idea plucked from the many circulating in his head, he said.

All he knew was that he didn’t want to let many of the folks parading through his courtroom leave without making sure they understood how to make better choices.

Hoover and other members of the court staff pull from their own experiences and scour the Internet in search of ideas. Then, every Thursday after other court employees have gone home to their families, they stay behind to present the 90-minute programs they’ve put together.

“This is municipal court. We’re not here sending people away for life or 20 years. We’re trying to keep them out of trouble by training them now,” Hoover said. “That’s our duty.”

On a recent Thursday evening, Hoover slipped out of his intimidating judicial robe and put on his jeans and a red pullover sweater.

“When I sit up there on the bench, they’re all terrified of me,” Hoover said. Although the after-hours program is part of the sentencing he hands out, he dresses down for these evenings to present a different message. This is about human beings reaching out to other human beings, court workers offering heartfelt guidance to souls that have lost their way.

Hoover stood in front of his bench and greeted 30 people convicted of alcohol- and drug-related crimes. Then he introduced Lauren, who attended the same program just last year.

She didn’t offer her last name, in the tradition of Alcoholics Anonymous, but she has a claim to fame here. In 2015, she registered a .356 on a Breathalyzer test — the highest recorded by the Stow court that year.

“I didn’t know if I’d make it this far, but I’m grateful I was standing in this room before Judge Hoover,” the 31-year-old told the gathering.

For the next half hour, she detailed her brutal descent into alcoholism, including multiple OVI convictions, being hauled out of a bar by paramedics, the loss of a teaching job and the death of her brother to alcoholism.

“I’m one of you,” she said, recalling how she used to see drinking as a way of melting away feelings of anger and isolation. “I didn’t know it would be hard to stop this disease.”

Now sober for over a year, she’s newly married, has a daughter, is back at work, and has mended bridges with her family. She said she’s eager to offer hope to others who are walking in her shoes.

“All those years, watching my mom cry, watching my dad tremble seeing what happened to his children,” she said. “I just thought all those moments can help someone else.”

Then Hoover introduced another speaker from the other side of the veil.

Michael Gershe is a 46-year-old Kent State University instructor and a stand-up comedian who uses laughter to bond with his audience.

He promised that when he was done, everyone would “walk out a little bit differently — but not Bruce Jenner different.”

The class laughed as he delivered more one-liners, and he was well into his presentation before it became clear why he was there.

He wanted the substance abusers before him to understand what it was like growing up without a mother. He was weeks old when his mother died after a drunk driver plowed into the family on the way home from vacation.

He played the only video he has of his 28-year-old mom, taken a month before her death in 1970. She’s holding her new baby, carrying him out of the house, bouncing him while his 3-year-old brother played on monkey bars in the backyard. The song Angel of the Morning played while the otherwise silent video ran.

In two minutes, it was over.

“That’s all I get because someone made the choice to drink and drive,” Gershe said.

In 2015, he founded a nonprofit called Magic of Life and travels the country so substance abusers can “meet a motherless child.”

As Gershe wrapped up his program, a second class in the lobby was winding down.

A dozen people watched a video projected onto the wall. A man is studying human behavior by leaving cash laying on the dashboard of his open car. When someone takes the money and walks away, he confronts them and the money is returned.

“Do you feel his debt was paid because he gave the money back?” Turney asked. Several nod yes. No harm, no foul.

Then a second video, this one of a passerby who takes the money off the dashboard and tucks it into the car’s glove compartment. When asked about his action, the passerby revealed he was a homeless veteran and he didn’t want the money to tempt anyone else.

“How do you feel about that?” Hines asked the group.

The answer from one woman suggested the class might be having the impact that Hoover intended all along.

“Then you have us taking clothes or pop from a store,” she said, tearing up, “and here’s this man who served his country not taking the money when it would have been so easy. It makes me feel like a piece of s***.” 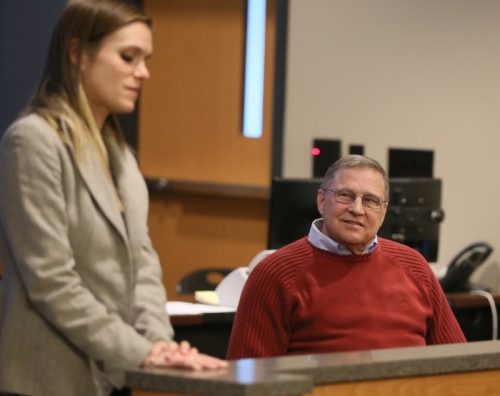 You can view the full article on the Akron Beacon Journal Web Site [www.ohio.com] by following this link: